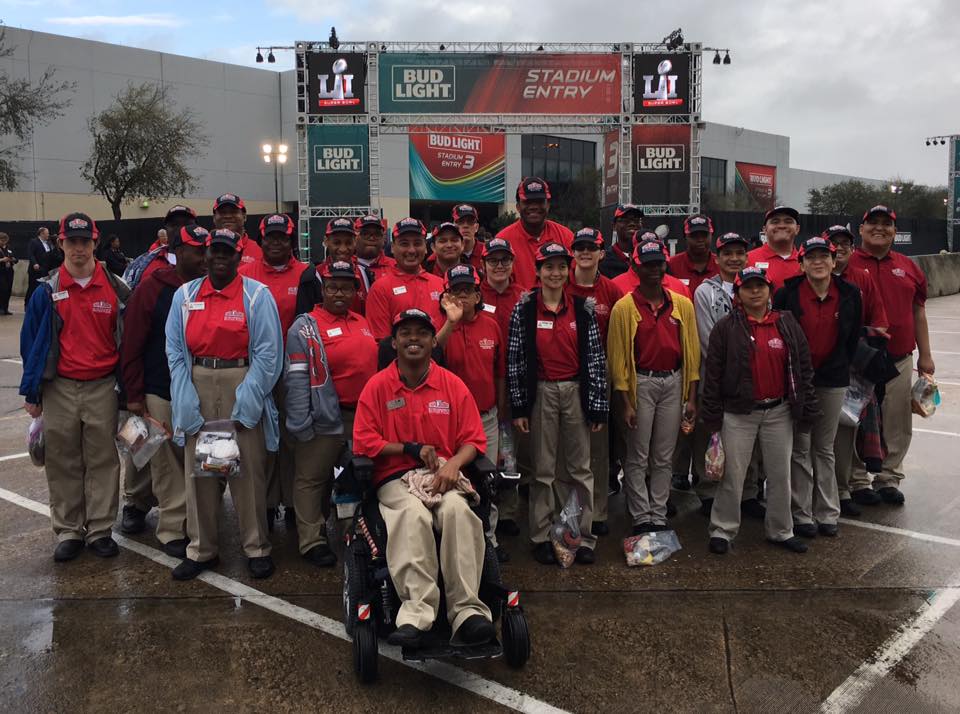 We’re excited to announce that 28 adults with intellectual challenges worked in competitve, real-world jobs during Super Bowl LI thanks to a partnership between The H.E.A.R.T. Program and Papa John’s Pizza.  This Super Bowl Sunday victory occurred at NRG Stadium at concession stands 101, 112, 121, 132, 305, and 333.

A surprising Super Bowl victory for adults with developmental disabilities:

Whether you were cheering for the New England Patriots or a fan of the Atlanta Falcons in Super Bowl LI Sunday, February 5, 2017 in Houston, Texas – there was  another exciting team victory at NRG Stadium that Sunday – and it’s been a long time in the making.

We’re talking about the technology partnership between Blue Lance, a global provider of cyber governance solutions, and The H.E.A.R.T Program, a non-profit organization that creates new opportunities for adults with developmental disabilities. Together, they unveiled i4Me, an innovative app that allows adults with learning disabilities to operate six Papa John’s Pizza stands at NRG Stadium.

The i4Me app is an inventory management system for businesses that allows trainees to quickly and easily identify products, sort, count, and record quantities. Trainees can interact with the app in four ways: by uploading photographs of products, listening to product names, reading product names, and making entries. These modifications empower adults with developmental disabilities to overcome challenges with spelling, reading, and writing.

The app has been tested by trainees at NRG Stadium in preparation for Super Bowl LI. “The impact is very significant,” said Jane Cummins, the co-founder and executive director of H.E.A.R.T. “We see trainees completing tasks with confidence and independence. They’re able to count pizza boxes and enter sales numbers without someone looking over their shoulder.” The CEO of Blue Lance, Umesh Verma, agreed. “We’re grateful to be part of an initiative in which adults with disabilities can adopt technology and thrive as part of society,” he said.

Other major benefits include its flexibility and adaptability for businesses. “The app is complicated on the back end but extremely simple to use,” said Reva Verma, the founder of Reneka App Builders, which designed the app in conjunction with Blue Lance. “This allows nice features like quick setup, quick modifications, and import and export capabilities. Best of all, it can be easily adapted and made available to the rest of the community with developmental disabilities.”

The collaborative effort between Blue Lance and H.E.A.R.T. has been recognized by the Texas Council for Developmental Disabilities (TCDD). In 2012, TCDD awarded the partnership with a grant to fund the development and pilot of the i4Me app. “The Texas Council for Developmental Disabilities is committed to helping people with developmental disabilities find jobs at competitive wages and in integrated settings,” said Beth Stalvey, TCDD executive director. “The council hopes that the success of the app developed by H.E.A.R.T. and Blue Lance can be replicated in other parts of Texas and the country.”

After five years of development and testing, the i4Me app was ready to pilot on Super Bowl LI. But even more ready are the trainees. Just ask Brian Gaspard of Papa John’s Pizza, who directed all operations on Super Bowl Sunday.

“With this app, we’re changing lives. There’s nothing these adults with disabilities can’t do at our pizza stands,” said Gaspard. “Super Bowl Sunday, they’ll be proud to put on their shirts and come to work.”